A Guide to this Blog 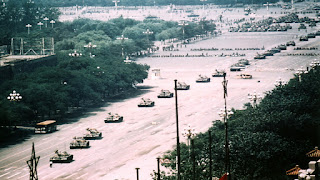 Picking apart the myriad reasons for what happened at Tiananmen Square in 1989 can be quite a big ask, especially in light of the conflicting information in the historical record. At the time of writing it has now been nearly 30 years since the incident occurred, however, the establishment of a national history in keeping with China's ongoing political ideology means that some degree of historiographical analysis will be required from students looking to get an overall picture of this multidimensional event.

In other words: the official and the unofficial histories of the Tiananmen Square incident are quite different from one another.

Before engaging with the opinions of a wide range of historians, students should examine the various causes of the event itself.

This can be looked at in three main ways:
Here's a sheet with 14 causes that can be sorted into the three above categories. Students can colour-code, cut-and-paste, or copy into a table. Click the link below to download. 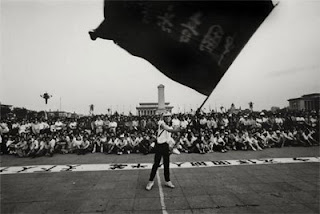 Following this, students can then begin looking at a variety of evaluations regarding the incident, and consider how each historian has grappled with the above three categories of reasoning. These have been gleamed from various books about 20th Century Chinese history, all of which I would recommend. They are as follows:

Despite numerous pleas to return home, the rebellious youths did not want to abandon their protests, so the leaders of the nation had to choose between employing force and making concessions. And they made their choice, turning the streets leading to Tiananmen red with blood.

Deng Xiaoping retained his firm conviction about the necessity for dictatorship in the form of the unchallengable rule of the Chinese Communist Party. When confronted by a vision of democracy, he could only see the spectre of chaos. He dug in his heels and would go no further.

Many in the Party saw the market forces of economic reforms to blame, that the modernisation of the economy had opened China up to the 'rotten West' and that this was how bourgeois liberalisation contaminated the minds of the youth. The CCP, now with a new upcoming leader in Jiang, now condemned Deng's planned reforms of the future.

Elders who enjoyed privileges in the Party wanted to hold onto these privileges at all costs, and felt the need to defend the socialist order that had made their elitism possible. Killing protestors was not a concern as they were 'anti-party counterrevolutionaries' who deserved to be eliminated. Loss of tourism and credit was of small concern compared to the survival of the Communist leadership. Deng declared that he did not fear foreign opinion for this reason.

Accurate figures of the massacre are impossible - Western sources estimated 3000 dead and 10 000 wounded. One report from the New York Times said 400-800. A Chinese government spokesman told an NBC anchorman that there were no casualties - certainly no bloodbath. The Chinese government later admitted to 23 students dying accidentally, and that 150 brave soldiers had died, with a further 5000 wounded.


The leaders lived in fear of their own people, constantly having to suppress their political aspirations. Deng personally ordered a military crackdown on pro-democracy demonstrators in Beijing, as tanks rolled into Tiananmen Square. The massacre was a display of brutal force and steely resolve, designed to send a signal that still pulsates to this day: do not query the monopoly of the one-party state.

Ezra F. Vogel, author of Deng Xiaoping and the Transformation of China, 2011


It's estimated that 100 000 protestors were in Tiananmen Square when the army moved in around midnight. Only several thousand were left waiting at 2 AM when the army reached the square. It's estimated that 300-2600 demonstrators were killed. Figures from Beijing hospitals show at least 478 dead and 920 wounded. Nearly 600 vehicles, including PLA trucks and armoured carriers, were damaged.

Maurice Meisner, author of Mao's China and After, 1999


Deng Xiaoping congratulated the police and the army who had crushed the 'counterrevolutionary rebellion'. And he offered condolences to the families of government soldiers who had died. He labelled the civilians as 'the dregs of society'. The government later released a figure of 300 civilian deaths which was mocked by eyewitnesses. It is estimated that 2000-7000 civilian deaths occurred. A nationwide wave of arrests occurred after the event, resulting in the incarceration of at least 1000, and the executions of 100s.

Resource: Assessment of the Tiananmen Square incident by Historians
Posted by Luke Bartolo at 4:36 AM